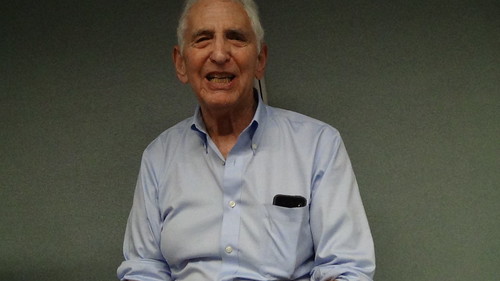 One man, an unknown protester, inspired one of the most courageous whistleblowing acts in history-- an act that helped end the Viet Nam war-- Daniel Ellsberg's release of The Pentagon Papers

After returning from Vietnam, Ellsberg went back to work at the RAND Corporation. In 1967, he contributed to a top-secret study of classified documents regarding the conduct of the Vietnam War that had been commissioned by Defense Secretary McNamara.[ 2 ] These documents, completed in 1968, later became known collectively as the Pentagon Papers. Because he held an extremely high-level security clearance, Ellsberg was one of very few individuals who had access to the complete set of documents.[ 3 ] They revealed that the government had knowledge all along that the war would not likely be won, and that continuing the war would lead to many times more casualties than was ever admitted publicly.[ 4 ] Further, the papers showed that high-ranking officials had a deep cynicism toward the public, as well as disregard for the loss of life and injury suffered by soldiers click here and civilians.[ 4 ]

By 1969 Ellsberg began attending anti-war events while still remaining in his position at RAND. He experienced an epiphany attending a War Resisters League conference at Haverford College in August 1969, listening to a speech given by a draft resister named Randy Kehler, who calmly said he was "very excited" that he would soon be able to join his friends in prison.[ 5 ] Ellsberg described his reaction:

And he said this very calmly. I hadn't known that he was about to be sentenced for draft resistance. It hit me as a total surprise and shock, because I heard his words in the midst of actually feeling proud of my country listening to him. And then I heard he was going to prison. It wasn't what he said exactly that changed my worldview. It was the example he was setting with his life. How his words in general showed that he was a stellar American, and that he was going to jail as a very deliberate choice-- because he thought it was the right thing to do. There was no question in my mind that my government was involved in an unjust war that was going to continue and get larger. Thousands of young men were dying each year. I left the auditorium and found a deserted men's room. I sat on the floor and cried for over an hour, just sobbing. The only time in my life I've reacted to something like that.[ 6 ]

In late 1969, with the assistance of his former RAND Corporation colleague, Anthony Russo, Ellsberg secretly made several sets of photocopies of the classified documents he had access to - these became known as the Pentagon Papers.

Throughout 1970, Ellsberg covertly attempted to persuade a few sympathetic U.S. Senators-- among them J. William Fulbright, chair of the Senate Foreign Relations Committee, and George McGovern, a leading opponent of the war-- to release the papers on the Senate floor, because a Senator could not be prosecuted for anything he said on-the-record before the Senate. Ellsberg told U.S. Senators that they should be prepared to go to jail in order to end the Vietnam War.[ 7 ]

When these efforts failed, Ellsberg released the documents to New York Times correspondent Neil Sheehan. On Sunday, June 13, 1971, the Times published the first of nine excerpts and commentaries on the 7,000 page collection. For 15 days, the Times was prevented from publishing its articles by court order requested by the Nixon administration. Meanwhile, Ellsberg leaked the documents to The Washington Post and 17 other newspapers [ 8 ][ 9 ]. On June 30, the Supreme Court ordered publication of the Times to resume freely (New York Times Co. v. United States). Although the Times did not reveal Ellsberg as their source, he went into hiding for 13 days afterwards, suspecting that the evidence would point to him as the source of the theft.[ 10 ]

On June 29, 1971, U.S. SenatorMike Gravel of Alaska entered 4,100 pages of the Papers into the record of his Subcommittee on Public Buildings and Grounds, which he had received from Ellsberg via Ben Bagdikian-- then an editor at the Washington Post. These portions of the Papers were subsequently published by Beacon Press.[ 11 ]

Randy Kehler never thought his going to prison would end the war. If I hadn't met Randy Kehler it wouldn't have occurred to me to copy those papers. His actions spoke to me as no mere words would have done. He put the right question in my mind at the right time.

Rob Kall is executive editor, publisher and site architect of OpEdNews.com, Host of the Rob Kall Bottom Up Radio Show (WNJC 1360 AM), President of Futurehealth, Inc, inventor . He is also published regularly on the Huffingtonpost.com
With his experience as architect and founder of a technorati top 200 blog, he is also a new media / social media consultant and trainer for corporations, non-profits, entrepreneurs and authors.

Rob is a frequent Speaker on the bottom up revolution, politics, The art, science and power of story, heroes and the hero's journey, Positive Psychology, Stress, Biofeedback and a wide range of subjects. He is a campaign consultant specializing in tapping the power of stories for issue positioning, stump speeches and debates, and optimizing tapping the power of new media. He recently retired as organizer of several conferences, including StoryCon, the Summit Meeting on the Art, Science and Application of (more...)

Related Topic(s): Activism Anti-War; Pentagon, Add Tags
Add to My Group(s)
Go To Commenting
The views expressed herein are the sole responsibility of the author and do not necessarily reflect those of this website or its editors.

To View Comments or Join the Conversation: